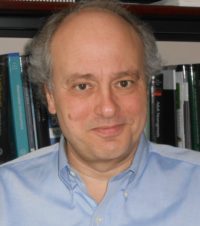 Steve is Professor of Neuroscience and Neurology at both the University of Rochester Medical Center and the University of Copenhagen in Denmark. He is Co-Director of the Center for Translational Neuromedicine, which is based at both institutions. In Rochester, he is the URMC Distinguished Professor of Neuroscience, and a former chairman of its department of neurology.

Steve is interested in cell genesis and regeneration in the adult brain, with a focus on the use of stem and progenitor cells in both modeling and treating neurodegenerative and myelin diseases. He remains active clinically, with subspecialty interests in the white matter disorders, and he is additionally board-certified in neuro-oncology. Steve has published over 250 papers in his field, including over 30 US patents. He is a recipient of the NIH’s Jacob Javits Neuroscience Award and the Novo Nordisk Foundation Laureate Award, and has been elected to Academia Europaea, the Association of American Physicians, the American Society for Clinical Investigation, and the American Neurological Association. He has served as a permanent member of the FDA Cell, Tissue and Gene Therapy Advisory Committee. His current work is supported by the NIMH, NINDS, the Adelson Medical Research Foundation and by the Olav Thon, Lundbeck and Novo Nordisk Foundations in Denmark.

Steve trained at the University of Pennsylvania (BA), Rockefeller University (PhD), and Cornell (MD), prior to his residency in neurology at New York Hospital-Cornell and the Memorial Sloan-Kettering Cancer Center. He remained on staff at Cornell, as the Nathan Cummings Chair in Neurology, before moving to Rochester in 2003, as the Dean Zutes Chair in Biology of the Aging Brain.